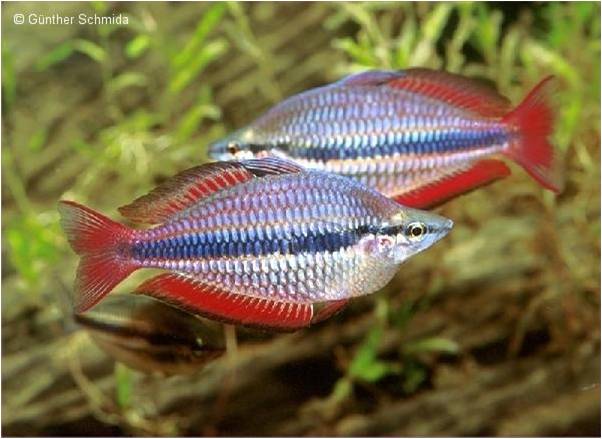 ANGFA membership provides a great opportunity to get hold of some rare and beautiful Rainbowfish but we realise that there may be many new to ANGFA that may not appreciate the extraordinary effort that has gone on to bring these amazing fish here.  What's covered here is some of the history that conveys how we got to where we are today and briefly discuss the Rainbowfish group’s goals to preserve these species into the future.

The Black-Banded Rainbowfish (Melanotaenia nigrans) was the very first to be described (Richardson, 1843) from a collection of freshwater fish that were acquired in the Northern Territory in early 1840. A single specimen somehow ended up in the British Museum in London, where it was described as a new species of hardyhead named Atherina nigrans.  Later it was  determined by Gill in 1862 that while these fish evolved from an ancestral marine member of that group, there were sufficient differences between this nigrans and the real hardyheads for the genus Melanotaenia to be created (still in the family Atherinidae).  The genus name Melanotaenia came from the Greek word melanos meaning black and the Latin word taenia meaning stripe. 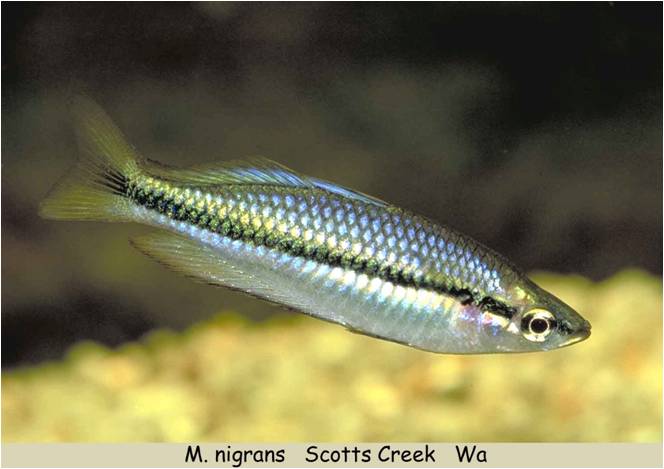 The creation of a subfamily Melanotaeniinae was made in 1894 to distinguish between the hardyheads even further.  However, another 70 years would go by before Rainbowfish were treated as an independent family by the late and great Australian scientist Ian Munro in 1964.

The title of the original Australian Rainbowfish however, really deserves to go to Melanotaenia duboulayi, the Crimson Spot Rainbowfish.  In fact there was a lot of misinformation about its name, commonly identified for many years as Melanotaenia nigrans because of its earlier discovery.  It was first Rainbowfish maintained in the Australian aquarium hobby from around the turn of the 20th century and were exported to Germany in 1927 and soon found their way to North America where they even became one of the first “pest fish”, finding their way to the Mississippi River.   Gunther Schimda made reference to the Crimson Spot Rainbowfish in one of ANGFA’s journal editions that the nigrans he thought he knew as a teenager in Germany turned out to be something else when he caught and recognised the real duboulayi in a Northern NSW River. 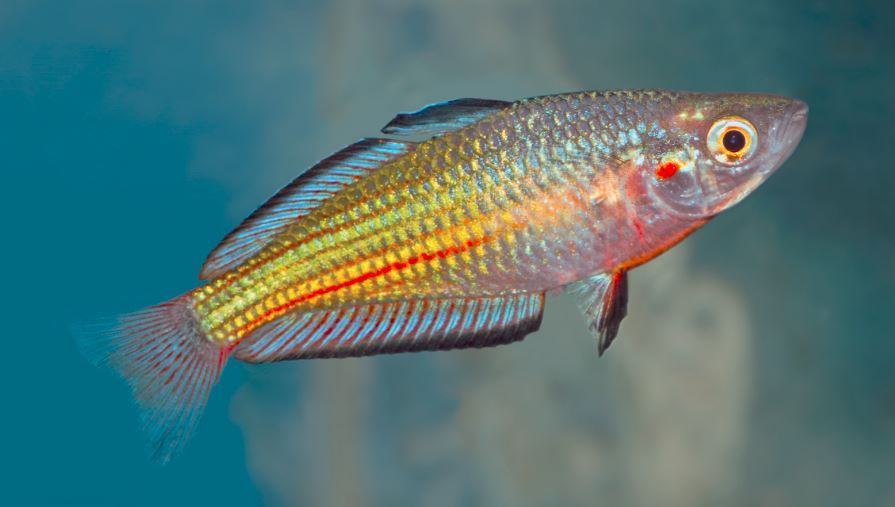 Despite the great individual discoveries that came before, it was arguably Gerry Allen that had the biggest scientific impact by ending the long-standing confusion regarding the affiliation of many Rainbowfish species and their exact scientific names.   Dr Gerry Allen, in his former capacity as Curator of Fishes at the Western Australian Museum discovered in 1974 a new Rainbowfish species in the far North of Western Australia and this aroused his curiosity.  Soon after he was travelling and discovering new species throughout Australia and New Guinea.  Even today he is involved in the discovery of new species in unexplored and recently opened up parts of West Papua (Irian Jaya). 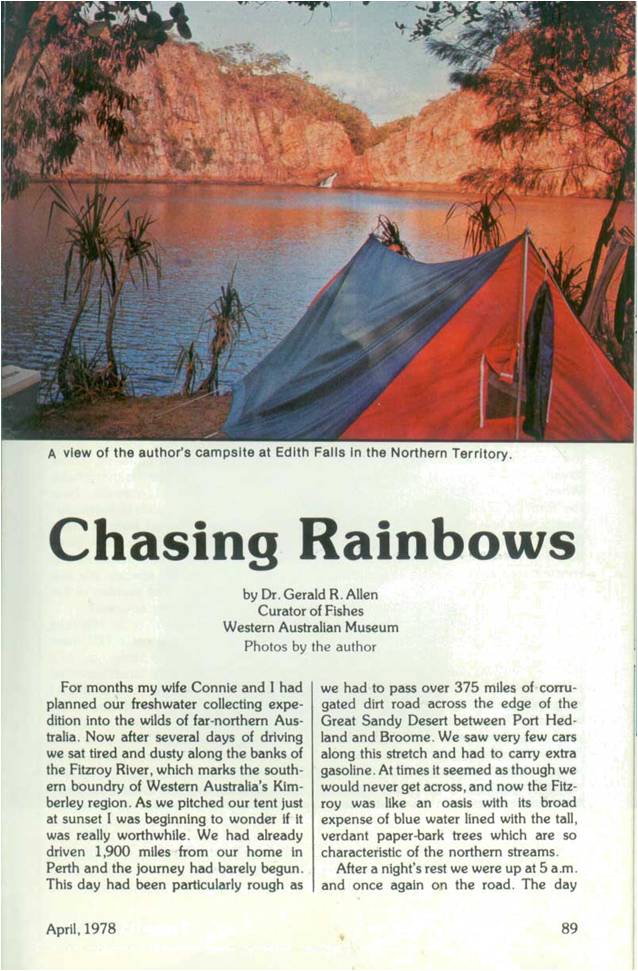 With more than 70 known species now known in this family of fish, each having a very limited distribution, Rainbowfish have inspired a cult following.  You see this today in googling the many websites based around the world devoted to their study and propagation.

The early days of ANGFA

Discussions of Rainbowfish history would be pretty much meaningless without mentioning the foundation of ANGFA which occurred in the late 1970’s and around the same time that Dr Gerry Allen first made that serendipitous discovery in North Western Australia.  There was a shortage of accurate information on Australian fishes, so a growing number of keen Australian native fish keepers from Melbourne, Canberra, Sydney and Brisbane from aquarium societies and other similarly related groups got together to form an association to share knowledge about Native fish.  It is reported that Gerry received a lot of support in particular in the East Coast from local collectors, scientists and aquarists.  Key individuals with particular expertise and interests banded together; there were expert aquarists, photographers and writers all keen to disseminate information and share precious fish stocks.  There were no better fish photographers in the hobby then than Neil Armstrong and Gunter Schmida or diligent or canny aquarists than Ron Bowman or tireless working and resourceful editors / publishers “on a shoe-string” than Adrian Tappin or Ken Smales.  There are certainly too many others to mention, especially the many intrepid collectors, but ANGFA was particularly fortunate to have Barry Crockford as part of the association.  Based in PNG, Barry was able to follow the path of Gerry Allen and at times work together to collect and ship newly discovered species to Australia.  This was critical because Gerry’s professional priority meant most captured specimens were destined for a formalin collecting jar.   Once caught, prepared and shipped by Barry and landed into Australia, these fishes were quickly distributed to ANGFA members, bred, photographed and sent all over the world. 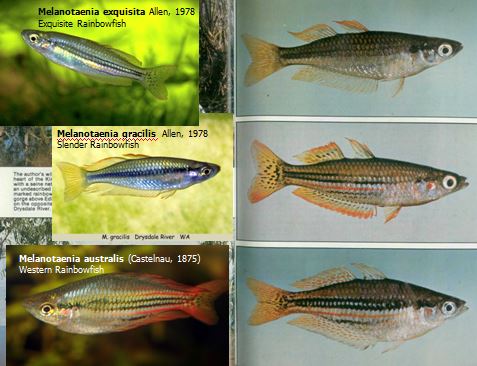 Barry also needs to be noted for discovering the Spotted Rainbowfish (Glossolepis maculosus). 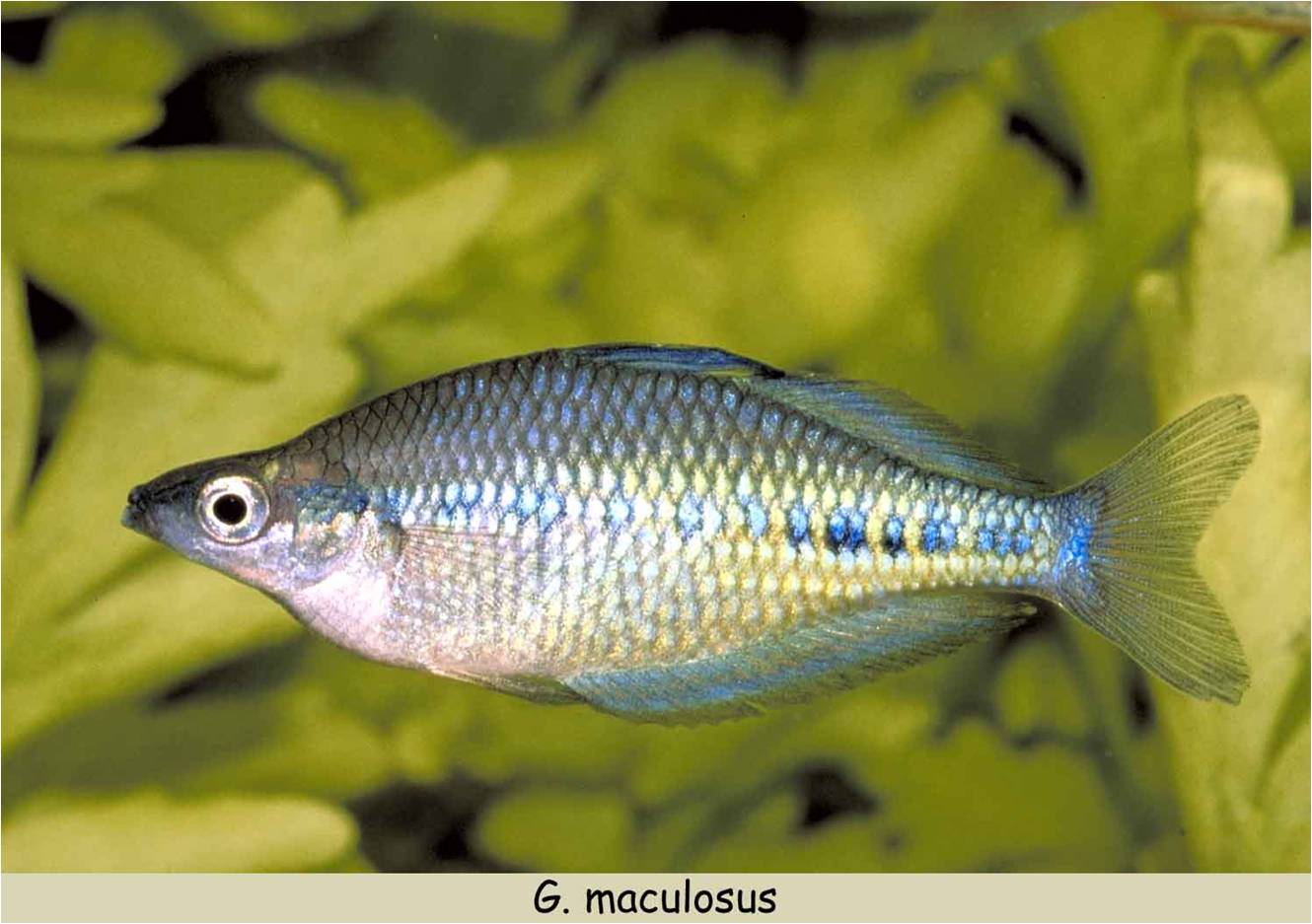 Arguably the lasting achievement and contribution of ANGFA is the 30 year collected history of the journal “Fishes of Sahul”.  Sahul refers to the land mass that existed up to about 10,000 years ago when bridges joined Tasmania and New Guinea to Australia and the Fishes of Sahul (first published July 1983) and is an appropriate name for the journal of the Australia New Guinea Fishes Association.   For those that may be new to ANGFA, I implore you to get hold of the back catalogue of digital FOS and check for yourself the amazing journey and many discoveries.  In the creation of FOS followed the objectives of ANGFA “to promote the keeping, conservation, study and propagation of the native species of Australia and New Guinea”.

The relatively free flow of newly discovered Rainbowfish into Australia from the late 1970’s was finally halted in 1986 with an import ban on New Guinea species entering Australia with the very last of the fish landing on the eve of the ban.  Despite this, fishes from remote PNG and Irian Jaya have since found their way into Australia.  Many of the new discoveries owe their existence in the world hobby to the remarkable and persistent efforts of Heiko Bleher.  Over fifty described Rainbowfish have made there way into the Australia hobby. 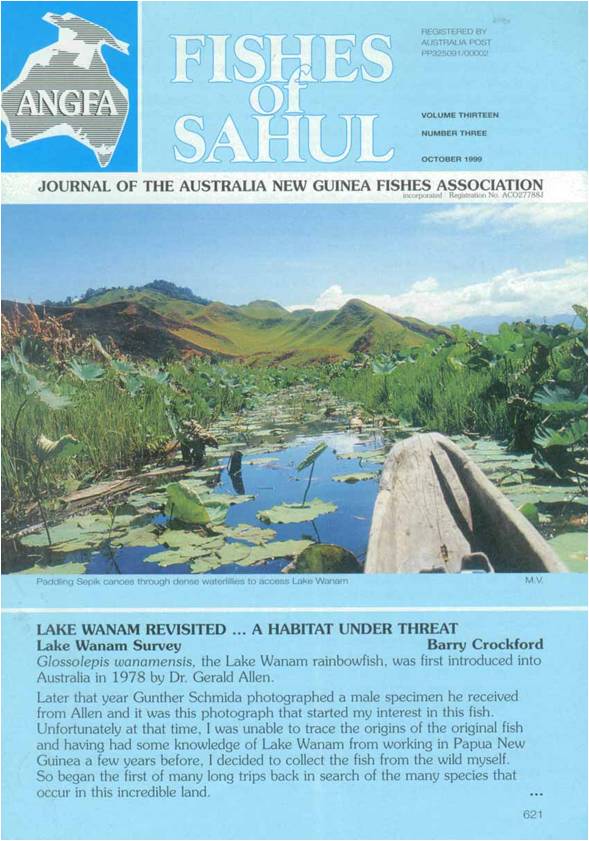 So now we are well into 2015 and we again enter another revival of the “Rainbowfish group” to preserve the rarer fish into the future. This is not the first attempt that such a group has formed to preserve endangered species in the hobby, but the baton has been passed on again.  There are Rainbowfish from Australia and New Guinea out there in the aquarium shops that are in good condition in terms of availability in the hobby.  We all know them; they are common, easy to breed, easy to raise by commercial breeders and highly colourful and desirable tank fillers at every pet shop.  These are not the focus of the group.

There are others that are good, but could be better.  These include the Goldie River Rainbowfish, M.goldiei (Macleay, 1883) which was one of the first New Guinea Rainbowfishes to enter Australia and has been brought in at least on at three occasions.  It was first maintained in the Australian as early as 1958 and perhaps even earlier.  A second collection was made by Gerry Allen / Barry Crockford in 1978.  But as the number of new species arrived from New Guinea, M.goldiei fell out of favour with hobbyists and most of the captive stock mostly disappeared.  Despite this rather long association with the aquarium hobby, not a great deal of information has been written about this species. This is a reoccurring theme with other species as well.

You’d probably be surprised to know that the Lake Kutubu Rainbowfish, Melanotaenia lacustris (Munro, 1964) is vulnerable in the hobby.  In 1983 Gerry Allen, John Paska and Barry Crockford risked life and limb, caught malaria and flew in dodgy single engine aircraft to collect 40 specimens and send them to Melbourne. Only four (a male and three females) survived the trip and one week later the male died.  Heiko Bleher on sighting a photograph of these beauties organised an expedition soon afterwards to collect new specimens in 1986. Bleher returned to the lake in 1988 with Gerry Allen and again returned with more fish.  The future of M.lacustris is questionable in the wild. The introduction of fishing and tourism in Lake Kutubu has endangered M.lacustris and the other species in the lake.  Other threats such as pollution from various sources have reached Lake Kutubu and number of other rivers.  M.lacustris is catalogued as a threatened species and was included on the CITES red list in 2002 along with G.incisus and M.boesmani.  The other problem with these fish in Australia is that everyone thinks that they are common and thinking this very few people are spending time keeping quality populations going.

The Lake Tebera Rainbowfish, M.herbertaxelrodi (Allen, 1981) is another example.  It was first collected by Gerry Allen in 1980 and brought into Australia it was widely distributed in the hobby.  It was once common, but where are the good specimens now?

The Priority List, however, is reserved for the fish species that are extremely rare in the Australian hobby.  For New Guinea species this is mainly due to the fact that there have been no imports since the ban in 1986 and the aquarium populations have disappeared.  These fish include Chilatherina axelrodi , C.campsi G.ramuensis, M.fredericki , M.monticola, M.oktediensis , M.arfakensis , C.fasciata Clearwater Ck , M.catherinae, M.goldiei , M.maccullochi PNG and Pseudomugil connieae

Of the Australian species the main problem is that these species or forms are isolated and extremely difficult to re-collect.  In some instances the fish are either extinct or endangered or remote and restricted in habitat; such as M.eachamensis - (lake form extinct), M. trifasciata Cape - Arnhem, Giddy River  and Yirrkala, P.signifer - Ross R, M.pygmaea, Mogurnda adspersa - Inverell NSW, P.gertrudae - Bathurst Is and M.exquisita - Gunlom/Waterfall Ck.

So as Mark Twain once said, “Denial ain’t just a river in Egypt”.  It is important to realise that if we continue to take these vulnerable species for granted, we’ll lose them.  Understand the status of your fish.  There’s nothing more disappointing to realise too late that the fish you used to have in a community tank are rare and not replaceable.  Make a commitment to keep a vulnerable species for the longer term and in particular keep them in a species only tank.  Aim to breed them or raise them and swap or sell amongst friends and ANGFA members.  There is a misconception that the commercial breeders can solve all the problems, but the reality is that as a business it is not viable to keep all of these species going. It needs many of us to help.

Lastly, share your experience with others – we are waiting to hear from you.