MB (mycobacteriosis) is the number one chronic disease in aquarium fish. It is responsible for about half of fish deaths due to unknown causes. Because MB often has no obvious or defining symptoms, hobbyists underestimate its prevalence. If a newly purchased fish stops eating and dies after a few weeks, most hobbyists do not suspect MB (much less know what it is). Additionally, chronic MB weakens the fish’s immune system making infected fish highly vulnerable to other diseases. I wonder how many hobbyists have attributed their fish’s death to other pathogens, when the underlying problem was chronic MB? How many hobbyists have attributed their fish’s death to old age or inbreeding, when the real problem was MB?

No fish is safe from this scourge. MB outbreaks have been reported in scientific laboratories, zoos, commercial fish farms, natural ponds, oceans, etc. Since the disease is incurable, the consequences to fish breeding can be devastating. As a fishkeeper, my own experience with MB was most unpleasant. Fortunately, there was a satisfactory outcome.

NATIVE FISH FOR YOUR AQUARIUM

ANGFA fish are the native fish of Australia and New Guinea. Although we often tend to think of these fish in terms of angling species such as the Murray Cod, Golden and Silver Perch of southern Australia or the Barramundi of northern Australia, there are many smaller species which are suitable for aquariums that can be found close to home and places beyond. This article is designed to give you a brief introduction to some of these fish. There are a number of excellent books and magazines as well as a wealth of information available from ANGFA, which can help you to learn more about the fish of our region.

ANGFA fish are just as easy to keep as other fish. Those from northern Australia require tropical conditions, those from southern Victoria and Tasmania will live quite happily at normal room temperatures in southern states.

Like any fish, each species has preferred “ideal” conditions, but most tropical species will live quite happily in normal community tank conditions with a temperature of from 20ºC to 27ºC, pH of 7.0 to 7.2 and hardness from 50 to 200 ppm. Many species will quite happily accept conditions outside of this range.

Like most other aquarium fish, ANGFA fish can be considered as either community species that will happily co-exist with others or "special-needs" species that need individual conditions or may have behaviour that requires them to be kept apart.

An article on the culturing of vinegar eels - Anguillula acetic/turbatrix, and the advantages they present over micro worms.

An article describing his experience with the treatment of white spot and velvet disease in Australian native fishes. 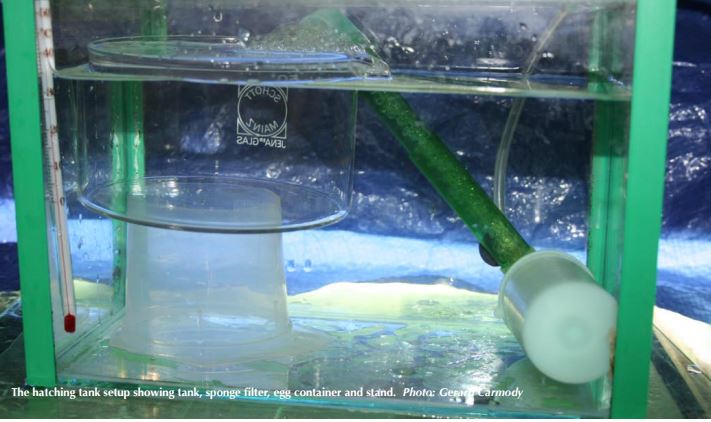 It is widely reported in the scientific literature that fish eggs are readily colonised by bacteria and within a couple of days after spawning eggs may be heavily overgrown.  Bacterial colonisation may have adverse effects on eggs, and on the developing embryo.  The use of antibiotics has often been the only recommended solution, but this has given rise both to risks for the environment and for the users themselves, and to the rapid appearance of resistance bacteria.